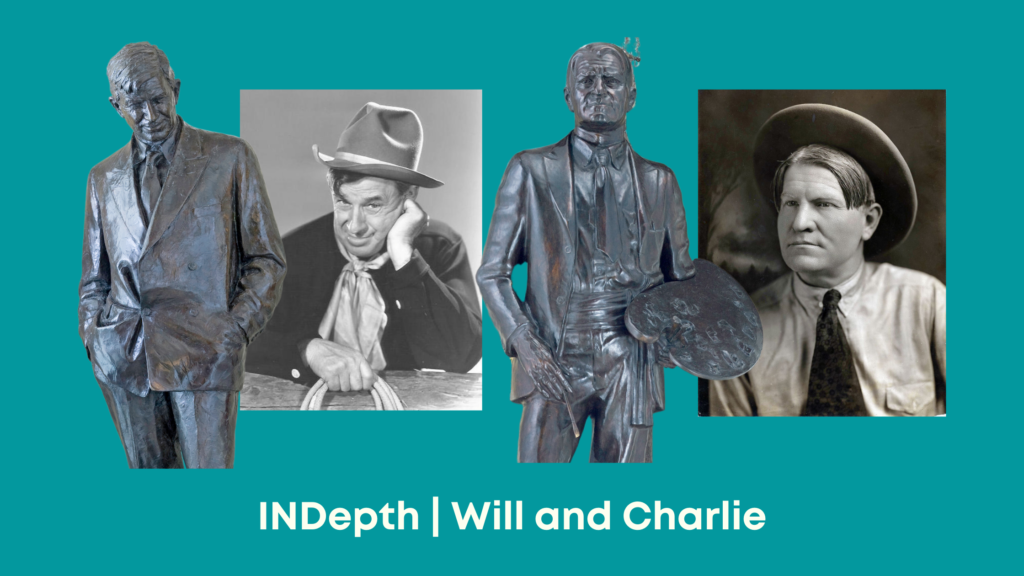 “We can get mighty rich, but if we haven’t got any friends, we will find we are poorer than anybody.” Will Rogers, 1930

We all likely know Will Rogers as the Cherokee Kid, Oklahoma’s favorite son and the guy who famously never met a man he didn’t like. At heart, Will Rogers was a storyteller extraordinaire, who loved to spin yarns as much as he loved to spin a rope.

But when the storyteller wants to hear a good story, who does he turn to?

For Will Rogers, the answer came in a chance meeting with a kindred spirit, Charles Marion Russell, somewhere around 1905 or ’06. C.M. Russell, or Charlie as he was affectionately known to many, was a storyteller of a different stripe. He told many of his stories without ever speaking a word, using a brush, oil paints and an innate talent for capturing the moment on canvas.

While Will hailed from Indian Territory in present-day Oklahoma, Charlie’s life began in St. Louis, Missouri, before finding his way to his adopted state of Montana as a teenager to become an honest-to-goodness cowboy. Both had a deep love and appreciation of the western life — a way of life that was quickly disappearing by the early 1900s. A 15-year gap between their ages didn’t deter them from becoming fast friends. Both had years of real-life experiences ranching and living outside in nature, and each had more than his share of talent and ambition.

Charlie being the older had a bit of a head start on Will in the fame department. His colorful western art was highly sought after. As Will’s own stardom began rising, first in vaudeville and the “Ziegfield Follies” (be sure to check out Cherokee Almanac: Will Rogers’ Broadway Debut – OsiyoTV) and later in cinema, it’s thought that Charlie may have been an experienced shoulder to lean on and certainly a sounding board for Will at times, dealing with the onset of fame.

Of the two, Charlie tended towards being outgoing and gregarious. In spite of his public persona, Will Rogers was more introverted and loved spending time alone, often on horseback, riding the hills above his home in Santa Monica, California. “I didn’t run with the pack,” he observed of himself. Charlie, on the other hand, was “a good mixer.” And Charlie loved to tell stories to a rapt audience when he wasn’t holed up painting or sculpting in Great Falls, Montana.

Somehow these two disparate personalities meshed. Over time their families became close, as well, spending a great deal of time together. To amuse themselves, the two men often were seen speaking a form of Indian sign language to each other. Charlie, who considered himself an illustrator rather than an artist, was known for sending funny, folksy letters to his inner circle, beautifully decorated with pen and ink images.

One such letter to “Friend Bill,” explains why the Russells won’t be able to visit over the summer. As Charlie put it, “My wife got a letter from your best half asking us to come and camp with you all. We thank you very much, but we won’t work your range this year. We’ve got a 6-month-old boy at our camp, and we think he’s a little young for trail work, so we are going to close herd him for a while. The stork didn’t bring him. He had been on Earth about three moons when he was thrown in my cut, but he’s wearing my iron now. …”

Nonetheless, they often crossed paths and kept the friendship going. In 1921, Will Rogers was in Los Angeles filming “A Poor Relation,” when Charlie dropped by the set for a visit. And when Charlie had a star-studded 60th birthday celebration in Los Angeles in 1924, who else but his good friend Bill could possibly serve as master of ceremonies? One of Charlie’s most-recognizable works to this day remains the bronze sculpture he created of Will riding his favorite polo pony, Soapsuds.

The friendship flourished until Charlie’s death in 1926. The following year Charlie’s wife and business manager, Nancy Russell, asked Will to write the forward for a posthumous book she was publishing on her late husband’s life and work, “Trails Plowed Under.” In what many people consider some of Will Rogers’ finest writing, he eulogized his friend at length, calling Charlie “… a real downright, honest-to-God human being.”

The Charles M. Russell Memorial Museum in Great Falls, Montana, opened its doors on July 4, 1930, underwritten by donations from across the globe. The first donation, a $500 check, was written by none other than his old friend, Will Rogers.

Will left us, too, not long after, in a plane crash near Point Barrow, Alaska, on August 15, 1935. In an odd twist of fate that the two would no doubt appreciate (and might even get a chuckle over), both men can be found representing their respective home states of Oklahoma and Montana as larger-than-life bronzes in the U.S. Capitol’s National Statuary Hall.